On Sunday we spent most of the day driving to Dearborn. We did a quick drive around tour of the Ford Rouge Center and then went to Dinner at Al Ameer. The servings at dinner were giant. After dinner we went to Shatilas to get pastries for our hosts for the rest of the week.

On Monday we started the day at the Ford Rouge Center. Here we sat through two video presentations on the history of the Rouge plant and the F-150 truck. After the presentations we took a catwalk tour through the plant. The plant was massive. Seeing the size of the plant really showed just how many fixed costs there are in a factory and the importance of economies of scale.

After the Rouge Center we went to The Henry Ford Museum. I missed a significant portion of this because I took a trip to the urgent care, but what I did see in this museum was exciting. It was helpful to see the evolution of design in the auto industry through all of the cars in the museum. It was also exciting to see the concepts and where the industry may be headed.

After the Museum Tour we drove around Detroit. We saw an abundance of abandoned homes. We also saw a work of art known as the Heidelberg Project. It is a few blocks of homes that have been turned into an interactive art piece for the community.

Tuesday was an early start for us. We started our day at Federal Mogul’s center in Plymouth. We learned about the structure of the company and the innovation that was happening in the facility. Touring the facility, we saw lots of laboratories and learned a lot about how innovation occurs and the pace at which new technologies move into the market. The tour at Federal Mogul helped for us to gain a better understanding of supply chains.

After this we visited UMTRI to talk about the future of the auto industry. Much of it revolved around automated cars. We participated in a driving simulator at UMTRI that may be used to test automation in vehicles. We also discussed the role and future of electric vehicles.

We began Wednesday at the Federal Reserve. Here we learned about the economic history of Detroit and the lead up to the bankruptcy crisis. We discussed the factors that led to bankruptcy and the progress that the city is making to pull themselves back from that. The city today is still facing major issues, but after the meeting at the Fed I am still very skeptical about the future of Detroit.

The Ford Piquette museum was our next stop. Here we learned about the production of the model T and the history of the auto industry’s rise in Detroit. It was really interesting to hear how so many great minds came together in the same place in time to lead to the rise of the United States auto industry. It was great seeing all of the model Ts and well as other competitor vehicles from the era.

For Dinner this evening we met with people from Auto News and Wards. We talked about a variety of topics from many areas in the industry. Tesla was a major talking point during the night as well as electric vehicles in general. We discussed the direction that the industry was headed as well as the state of auto dealers in the US.

In Thursday we started out with a trip to the center for automotive research. Here we discussed the role of automation in the industry. This was a great visit because, contrary to other places, we learned a lot about the economics side of the industry, rather than the engineering side.

After Lunch we visited Continental structural plastics to see an important part of the supply chain. CSP makes the “Freedom Panels” for jeeps and the bodies for Corvettes. We learned about the advantages of plastics over heavier metals. The biggest take away from this visit was learning about how the supply chain works in the auto industry.

We continued with our visits of suppliers by visiting the Giffen facility. Giffen makes paint shops for suppliers and OEMs. Paint shops are some of the most important and expensive parts of the supply chain. We learned about Giffen’s innovative technologies and there role in interacting with other suppliers and OEMs.

Just before leaving for Lexington we stopped in Ohio to see a CSP factory that happened to use a Giffen paint shop. We learned about the role of this specific plant which was building “freedom panels” for Jeep. The sheer size of the plant was impressive, but the coordination of all moving parts on the floor was also impressive. We discussed the discipline that it takes to run an efficient factory and produce quality goods.

Before leaving the hotel we were tasked with finding our favorite auto picture framed throughout the hallways of the Pink Palace. 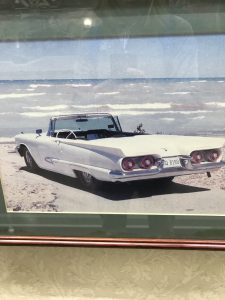 This Pontiac Firebird was my favorite photo. I enjoy the fins on the back of the car and the convertible roof. I also like the fact that its on the beach.