Meeting with both Ellen Hughes-Cromwick and Dennis Tosh was highly informative regarding Ford’s global status and future plans. Ms. Hughes-Cromwick seemed to believe that Ford was positioned well in the current growth market. When asked about China, she thought Ford would grow quickly and noted that they are already up to four percent of the market from virtually no share only a year or two ago. 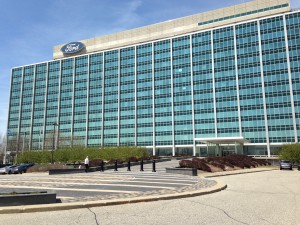 Ms. Hughes-Cromwick also talked about matching demand with supply. She seemed to believe that reducing production in downturns was a possibility. While I didn’t press her on this insinuation, what we have studied in class suggests that this is easier said than done. OEMs face very high fixed costs, and reducing their volume makes it more difficult to cover these costs. Additionally, Ford and other OEMs face huge healthcare and pension liabilities making it easier to sell its way to health, than cut its way to health.

The Federal Mogul visit provided a rare opportunity to get a glimpse at what goes into the development of parts that face incredible force and ware. I was struck by the incredible amount of investment that has been poured into the Plymouth Technical Center and I imagine similar technical centers around the country. The lab looked more like and research and development facility for a major pharmaceutical company than an automotive parts supplier. With its scanning electron microscope and other complex machinery, the facility truly seemed cutting edge. The level of sophistication alluded to both the competitiveness of the industry and the amount of money generated by the industry. Federal Mogul competes for every tiny reduction in friction generated by its parts. They can then advertise this reduction and charge just a touch more for its products.

Federal Mogul’s current position of strength, however, stems from the uptick in demand in recent years. Due to the cyclical nature of the auto industry, eventually this period of growth will slow and Federal Mogul, like OEMs will have to respond by reducing volume. Presumably, this is difficult for Federal Mogul much like it is for OEMs.

The Detroit Branch of the Chicago Federal Reserve:

On Tuesday morning we met with Dr. Paul Traub of the Federal Reserve who gave us a run down of the state of the U.S. economy. Generally, the feeling I got from the meeting was that Dr. Traub is optimistic about the future of the U.S. economy although this optimism is tempered by the plodding recovery. The Fed has continued to hold interest rates down in large part because inflation is still occurring at a slow pace. Additionally, low interest rates help to encourage borrowing and lending, helping to stimulate the economy, at least in theory. The meeting demonstrated the Fed’s role not only in keeping an eye on the country’s currency, but helping to push the economy along when Congress can not or will not act.

After lunch at the Federal Reserve, we goosed it over to Ford HQ for a second time, this time to meet with the Group VP of Human Resources, Felicia Fields and Mary Anderson, Director of HR Strategy and Organization Development. They gave us a presentation that included material similar to that found in the annual report, albeit with an HR focus. The main takeaway I got from this meeting was that Ford is finding it harder and harder to attract STEM talent. Increasingly, American college kids are choosing non-STEM majors like Business, Accounting and the like. According to Econ 101 with Prof. Toomey, kids choose these business majors because, while the starting salaries are lower, they have more growth potential than STEM majors. This choice may not be entirely rational, but everyone knows about the millions that can be made on Wall Street while few know about the hundreds of thousands that can be made right of out school for engineers and mathematicians. 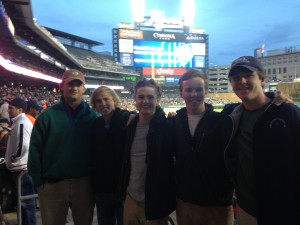 The Heidelburg Project, for me, provided a great opportunity to reflect on the current and past states of Detroit. From what I’ve read and heard from first hand sources, Detroit was once a thriving, healthy metropolis. It was supported by industry and housed healthy, middle-class neighborhoods. Those days have, unfortunately, slipped by. With car manufacturers moving their plants out into the suburbs and even more rural areas, the base holding up Detroit’s middle class crumbled. According to the curator of the Heidelburg Project, the main industries in Detroit now are liquor stores and churches.  I’ve been struck by the vacant feeling in Detroit. Entire blocks are deserted and it’s difficult to conceive that they were once full of homes.

Detroit may be able to revitalize, but downsizing and modernizing will be critical. It seems that Detroit’s downtown is too far away from its suburbs, leaving an awkward middle territory. The city is going to have to attract residents into this middle zone if it wants to stabilize. Detroit, after coming out of Bankruptcy, will have to invest in infrastructure for this area and address blight problems. This is easier said than done considering the current lack of tax revenue, but will be necessary.

We also had the chance to visit the Detroit Institute of Art, which houses this Diego Rivera mural. 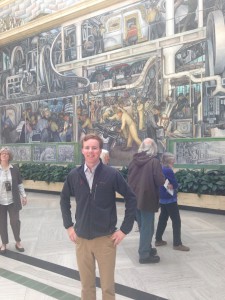 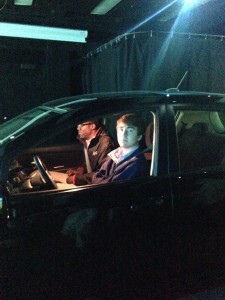 The University of Michigan Transportation Research Institute gave us a glimpse into the future of car safety. They are currently testing technology that will allow cars to communicate with each other and warn each other about sudden braking or potential crashes. Ultimately this radio technology could be another step in the direction of automation. The researchers at UMTRI seemed highly skeptical that cars could be fully automated only using sensors, instead, they argued, cars would have to talk to each other to avoid crashes. The work done at UMTRI could clearly have major implications for the future of the auto industry.

On Thursday morning we toured the historic Ford Rouge factory which today produces F-150s. On the tour, I was struck by the specificity of each person’s job. Each person had a couple of small tasks to perform and they did so with speed and precision. This streamlining is what allows the Ford Rouge plant to produce the incredible number of trucks it does every day.

At the Henry Ford Museum we saw several historic cars, a few of which are pictured below.

Borg Warner is one of the leading tier 1 power train suppliers. While their product lines have little crossover, they are in many ways similar to Federal Mogul, which we visited earlier in the week. In their presentation, they highlighted the company’s mission statement which is to “deliver innovative power train solutions that improve fuel economy, emissions and performance.” This mission statement nicely encapsulates the theme of their presentation, which was that there is a great deal of innovation left in making more fuel efficient and less polluting internal combustion drivetrains. Borg Warner is well positioned to advance this goal as they continue to develop products which operate with less friction and more efficiency. While OEMs are responsible for the design of the engine in general, tier one suppliers are critical in creating parts that run with as little friction as possible, reducing wear and increasing fuel efficiency.

Additionally, I had a fun time at Borg Warner as they sponsor the Indianapolis 500, which I’ve attended eight times.