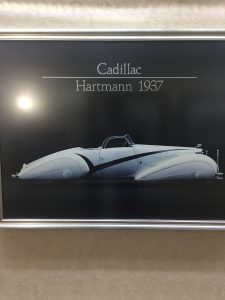 Sunday: After leaving Lexington around 8 AM, the prominence of the auto industry was made obvious by the thousands of cars we passed and amount of supporting infrastructure traveled over during the drive. One obvious variable during the drive was the road and infrastructure quality which was considerably worse in Michigan, which had extremely low quality roads. When we got closer to the city of Detroit,we passed a couple of car manufacturers, including Ford, which were miles long and had a massive geographic footprint. The number of supplier and product semis were very high on the interstate as well. Dinner at Al Ameer and Shatila showed the presence of a large immigrant community in the greater Detroit area.

Monday: The first stop Monday was at the Ford Rouge plant that began with a highly technology centered assembly walkthrough video as well as a video on the company’s history. The videos were followed by a tour around part of the assembly process of the Ford F150. This process was highly automated and efficient, producing around 600 trucks per shift. The assembly line is miles long and over a thousand employees work to each play a different part in the assembly. The colors and model packages were highly diversified with two rarely being the same in a row. All parts also had barcodes that are saved and individualized to the truck to help with tracking and warranty information. We then went to the building’s roof to see the huge size of the factory and steps they are taking to be more environmentally conscious such as the “green” roof.

The next stop was the Henry Ford Museum where his diverse collection of historical artifacts and innovation are showcased. There were agricultural innovations, many examples of trains throughout the years, presidential limousines, and even the chair Lincoln was sitting in when assassinated. Along with these items were hundreds of cars showing the evolution of builds, makes, and models throughout the over 100 year history of mass produced autos. My favorite part was the section on race cars that showed that as long as there have been cars, racing has existed.

Finally, we spent a few hours driving around the city of Detroit. The first observation I made was the sheer size of the city. Though there is a massive urban population, the citizens are dispersed vastly into suburbs in single family homes rather than large apartment buildings that would be more centralized. One striking observation was that in hours of driving around I only saw one police vehicle, even in some of the worst parts of the city. Another surprising item was that one block featured abandoned and rundown buildings and just two blocks over was one of the nicest neighborhoods in Detroit. We later learned that over 25% of structures in Detroit have been abandoned.

Tuesday: The day began at Federal Mogul where we toured their research and development facility as well as getting an overview of their business operations. The presentation of their business operations featured both their powertrain and aftermarket sales, focusing on their ability to participate in the manufacture of diesel engines and then the rebuilding of them multiple times. The most interesting thing I learned here was the complexity of pistons and that despite their appearance they are not perfectly cylindrical and generate huge amounts of stress on their parts. Their greatest advancement in my view is the new spark plug that can be more efficient and effective using a pronged system.

The next stop of the day was at MCity. This private and public partnership has created a simulated cityscape to allow for testing of autonomous vehicles and their capabilities. This multi acre compound has many of the aspects of everyday travel many drivers face and uses this recreation to test driverless technology in a safe space. We even had the opportunity to ride in an autonomous vehicle. The vehicle failed miserably at following an extremely simple path relative to the challenges it would face in the real world. This result severely dampened my expectations and timeline for the growth of autonomous vehicles. Another takeaway was the seemingly high demand for the use of the facility which charges suppliers for use as a testing ground.

We concluded the day at UMTRI meeting with directors of vehicle research. I learned that the CAFE emissions regulations were a driving factor in vehicle advancement in recent years. It was also evident that, lacking huge advancements, most vehicles will fall short of the expected standards by 2020 and 2025. We visited a simulated driver lab and I learned that semiautonomy is a pipe dream, in their view, because of human driver’s inability to act as a hands on driver without distraction of a car that supposedly drives itself. The day ended by visiting the “diviest of Ann Arbor townie dive bars”.

Wednesday: The day began with a visit to the Detroit branch of the Chicago district of the Federal Reserve Bank. We met with Paul Traub and Martin Lavelle who offered data and opinions on the Detroit, US, and auto economies’ health. Dr. Lavelle focused on the improvement of the Detroit situation mainly due to improvement in political competency. He noted that the city had, however, only improved from among the worst of city financial situations to par with other big cities around the US. I have my doubts that the city can avoid bankruptcy again due to its failing infrastructure and education systems paired with a shrinking tax base. Dr. Traub followed up with an overview of the US economy and automotive industry. He had a fairly left wing, nearly socialist, view of many privileges being considered rights and globalization being the future.

We then traveled to the Piquette Museum which was the original factory for Model T production pre-assembly line strategy. The museum had a wide array of Model T’s and showcased the variety and adaptability of the car. The most interesting fact to me was that Henry Ford was functionally illiterate [as an engineer, that is, he couldn’t “draft” blueprints … the prof] and relied on others to act on his visions.  We also visited the Heidelberg Project and were challenged by its founder to “see what you don’t want to see”.

Dinner featured automotive journalists of which I spent my time talking to Jim Treece who is an editor focused on dealers within the industry. He had a more optimistic view of autonomous cars and Tesla’s viability than I. He also spoke about the advantages of electric cars as a driver of one himself.

Thursday: Thursday morning began at the Center for Automotive Research where we were briefed on the work the University of Michigan spinoff does regarding automotive safety and data. The emissions requirements as a driving force behind innovation were once again stressed. Another point of emphasis was the safety regulations, or lack thereof, for autonomous vehicles on a national scale.

Our next stop was at Continental Structural Plastics. This OEM supplier specializes in the manufacture of lightweight steel/aluminum substitute parts made from high strength plastics. They currently produce Corvette bodies, Jeep hardtops, and many truck bed boxes. The company is rapidly expanding and was recently acquired by Teijin. The feeling at this company was different than at ones we had previously visited as the possibility for expansion was very probable and market saturation was nowhere near reached.

Finally, we visited Giffin in Auburn Hills. A major producer of paint shops for auto manufacturers, their product is the most expensive and highest consumer of energy in assembly of automobiles. The product that sets them apart in the marketplace is their ELITE system that uses 400G vortexes to separate paint from water and allow manufacturers to meet environmental standards. These shops are custom made and take years to design and implement. They are also extremely expensive so we got to visit the example they have set up in-house for buyer showcases.

Friday: On our way back to Lexington our only stop was at the CSP Jeep hardtop factory in Carey, Ohio. This factory produces and ships the Jeep hardtops to the final assembly factory. The most interesting part of this tour was the ability to stretch and form relatively small amounts of material into large structurally sound and strong components for the cars themselves. We also were able to see the Giffin paint installation in this factory in action. It was amazing to see how automated and efficient the process was in the factory when it previously was inferiorly done by many more workers. Overall, it was an amazing trip that allowed an in-depth look into the complexities of the industry from supplier to producer to consumer. 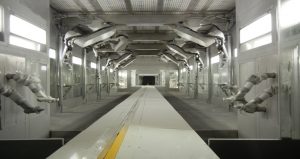 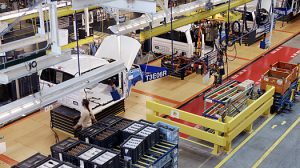