After arriving at the hotel around 4, I ,met up with the rest of the class to go out to dinner. That evening we went to a Lebanese restaurant, where Professor Smitka ordered plates for the table and we ate to our limits. The food was incredible and lots of laughs were shared around the table.

This morning we drove around Detroit to get a feel for the city and experience first hand the different areas of town. One of our stops was at the Heidelberg Proje

ct. This exhibit was designed by a local artist who began this endeavor to bring life back to the community and to promote safety and cooperation within the neighborhood. The art was very interesting and somewhat confusing, but I enjoyed the differences and trying to imagine what the artist must have been thinking when he created the individual pieces.

Later that afternoon, we got the opportunity to tour the Federal-Mogul Plant in Plymouth, MI. Federal-Mogul is a company that focuses on producing auto engine parts with a specialty in pistons. During 0ur time at the facilities we were able to learn about the different aspects that go into producing a engine piston and all of the unique techniques that gives Federal-Mogul an edge on its competitors.

One piece of technology that caught my eye was the Corona

Ignition device that Federal-Mogul was developing to make the classic spark plug a piece of the past. This device works at a much more efficient rate allowing for less excess energy to be wasted and for other energy cost cutting benefits to become common place. In fact, the developers at Federal-Mogul claimed that this new technology could raise fuel efficiency by up to 5% if simply installed into a modern car. This percentage could, in effect, be hiked to above 10% if fuel engineers create better allocations of fuel particles to work with this new technique.

Ford: A History and Future

Today, we got the opportunity to tour Ford’s Rouge Facility in Dearborn, MI. During this trip we were able to get the insider’s view on the manufacturing lines for Ford’s new F150 (seen right). I really enjoyed the 4-D show at the beginning of the tour and being able to walk around on a catwalk above the production lines. This birds eye view allowed us to see all of the small processes that go into creating the finished product and just how efficient Henry Ford’s assembly line has become in todays world.

After our tour of the Rouge, we made our way back to The Henry Ford. There we were able to tour look at the history of not only the auto industry, but also the aeronautical and general world history, especially as it pertained to the previous two areas. I enjoyed learning more about the evolution of the vehicles and what caused these changes. At one point during the tour I found myself drawn towards the K’nex building center and reliving the days of my youth while building a “race car”. When we went to leave, Barrett and I ended up accidentally leaving people there that should have been in our car (sorry Chase, David, T-Barns, and Adams).

That afternoon we went to meet with Hau Thai-Tang, the Vice President of Global Purchasing for Ford. During our meeting he pitched to us reasons for working with Ford and then opened up questions to the field on any topic related to Ford. He did a great job addressing our questions and then taking them to another level to ensure that we were satisfied with the answer. Not only did he provide understandable examples to difficult topics but he also gave great insight into current events and how they factor into Ford’s production and purchasing plan.

I was specifically impressed with his response when talking about the recent Takata airbag scandal. Mr. Thai-Tang discussed how it is not only a matter of potentially changing their airbag supplier, but intact a much more serious concern because Takata supplies many producers with seat belts, and other essentials. While this is currently the case, Ford has to get other companies on their mind and in their depth chart in the case that Takata goes belly up. This uncertainty makes for a very high tension market and can lead to a book or yet another recession.

Today we had the opportunity to go to Federal Reserve bank in Detroit. While there we got to see, from a distance, where the Bank stores its billions in reserves. Our tour guide told us that the vault was completely machine automated and housed boxes full of coins and bills in a grid that stood ten stories high (the majority descending below ground level). After our brief tour, we went upstairs to a meeting room where we had two economists discuss the future of Detroit expressing their concerns. They achieved this through emphasis on local factors but also the development and revival of the auto industry following its crash in 2007-08.

After eating lunch at the Federal Reserve’s cafeteria, we hopped in our cars and made our way to UMTRI (University of Michigan Transportation Research Institute). Here we met with two of the Research Professors who focus on the auto industry and learned about the different projects that they have been testing. I found it very interesting that UMTRI had an entire group dedicated to the study of how light and light entering a car effects the driver and other cars. One of the more interesting aspects that he talked about was how they tested the effect of turning headlights when a car goes to turn. In their study they looked at how visibility was effected from the drivers standpoint given the four different pairings for straight, and turned to 45 degrees (S/S, S/T, T/S, T/T). What they found was that the turned/turned was most effective for illuminating the road ahead and the obstacles there in. Then they proceeded to talk about how this was now changing from the physical turning of the headlamps to switching off some led lights to create the same effect.

Another interesting study that the gentleman did was to look at the correlation between location of the B Pillar on a small car and the crash numbers. (see images below: Honda Civic Coupe vs 4 door) 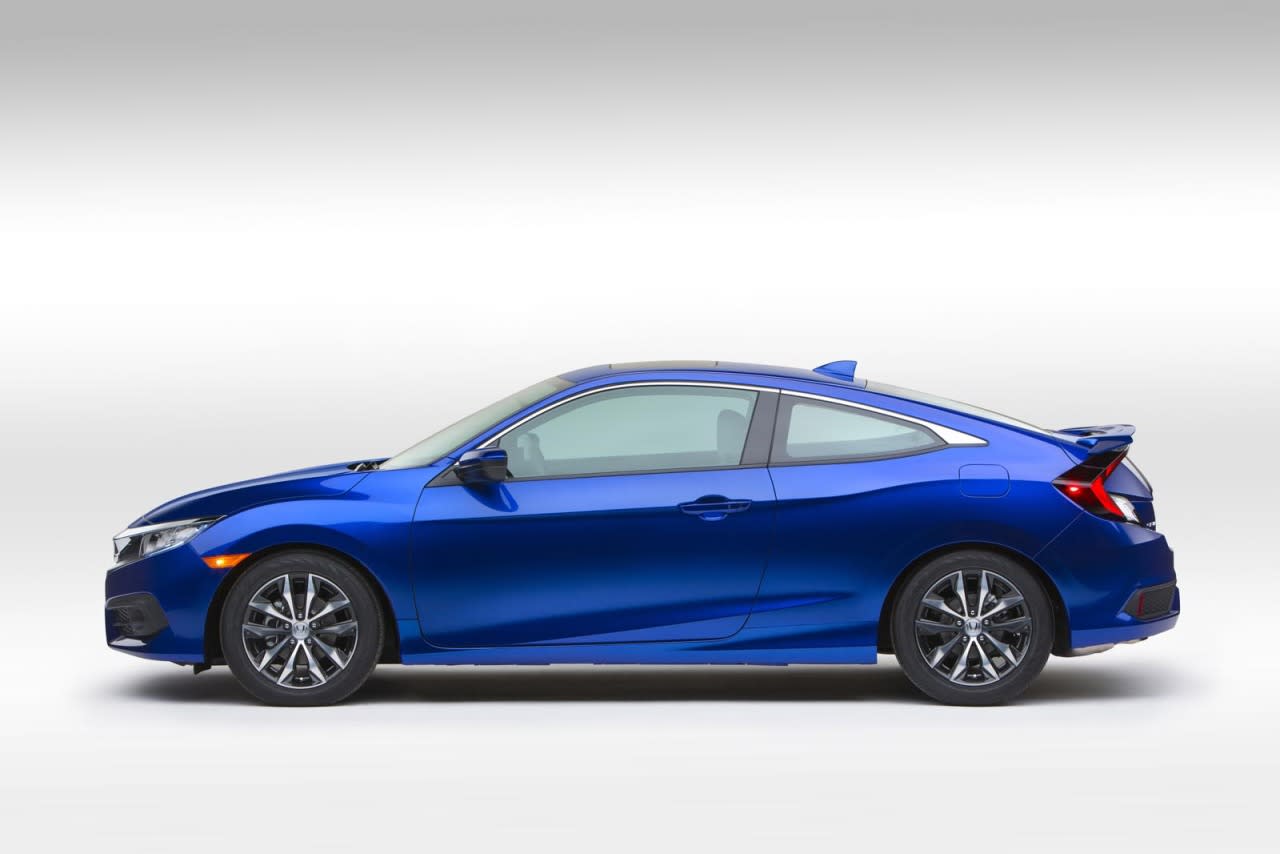 The B pillar is the one that runs down the door frame and acts as a support frame for the car and will prevent the roof from collapsing inwards in the event of a rollover. Given the physics behind this this pillar location will differ from car to car. What this study looked at was how this difference effected crash rates between the two styles. The team showed that the 4-door Civics were more likely to be involved in crashes when merging left. When looking at the cars above, we can see that the entire head rest is visible in the coupe and thus when the driver turns his/her head to check the blindspot he/she will be able to see more area with ease. In the 4-door Civic however, the head rest is barely visible. This shift in the B Pillar will make it much more difficult for the driver to check the cars blindspot before merging left. While this was a simple test to show it pointed out some very interesting areas where physics and safety can butt heads. I am interested to see if this study will lead to any changes in the auto industry.

Fox Recycling, Art, and Recycling as Art on Heidelberg Street

This morning we got to tour Fox Auto Parts recycling center. We completed our trajectory of the auto industry by learning about where cars meet the end of the road. At Fox, workers disassemble cars that have lost their use and resell parts and pieces to repair shops, rebuilders and auto enthusiasts. This was a really neat experience since we not only got to learn about this new side of the industry but were also able to hear specific questions and stories from Barrett, a member of our class who’s family has owned and operated its own Auto parts yard for a long time in Texas.

It was really cool to see that not only did the owner of this yard know of Barrett’s father, but, in fact, Barrett’s father had helped this owner expand into a secondary line of revenue: a You-Pull-It yard. The YPI yard was set up with many rows of cars by the same manufacturer and individuals could pay two dollars to enter the lot, search the cars and pull off/out whatever pieces that they needed and pay a discounted price at the end for whatever they wanted to take home. From what Barrett explained, this is really becoming the larger end of the market down in Texas. This market is mainly made up of individuals who have some auto background and either: 1) are rebuilding for fun and need specific pieces for as a weekend hobby, or 2) their car broke down and rather than spend lots of money to take it to a repair shop will come to the yard and get the piece they need to be able to get to work on Monday.

After Fox Auto Parts, we went to the Detroit Institute of Art where we were able to look around at all of the different exhibits. My personal favorites were the massive murals in the entry foyer. It was really interesting to be able to listen along as I looked at all of the details shown in the frescos. I was really impressed by the attention to detail and the symbolism involved in different aspects.

After the museum, we went back to the Heidelberg Project and got the opportunity to speak to Tyree Guyton. Tyree talked to us about his views on life and happiness, and explained the reasoning behind his work on Heidelberg Street. He sort of talked in questions and never really gave very many straight answers but he was definitely a interesting character with a unique life story.