To start the trip on a high note we decided to drive the eight hours from Lexington to our hotel in Detroit, cutting through West Virginia, Ohio, and then Michigan. With a medley of stops to stretch our legs, grab food, and switch drivers we reached our hotel at about 7pm. Our hotel, the Best Western of Dearborn, was also affectionately nicknamed the Pink Palace for its old school appearance and distinct bright pink coat of paint. After we got settled in and unpacked we headed to have dinner at a Lebanese restaurant called Al Ameer where our professor decided to surprise us by ordering what the restaurant called the “family platter #2”. The staff then proceeded to bring out the single largest platter of food I had ever seen consisting of at least four different kinds of meats and a collective of what I would consider 13 different dishes of moderate size, 2 types of dip, and an endless stream of bread rolls. My eyes were of course larger than my stomach and I proceeded to eat myself into a food comma. After eating we then went to a Lebanese pastry shop to get some gifts for the people we planned on meeting in the upcoming week. We then went back to the pink palace and slept 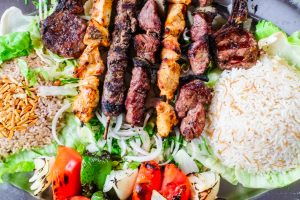 We started the day with a tour of the Ford Rouge Factory and Museum. The assembly line for the Ford F-150 truck series was one of the most impressive technological feats that I’ve ever seen in person. The assembly line itself is ½ a mile long and is efficient enough to assemble a truck in 6 and 1/2 hours just on the line or 22 hours from being cut, painted, and assembled.

Then we went and visited the Ford Museum which focused on American ingenuity and had a bunch of interesting things in it, including the chair Abraham Lincoln was assassinated in and a couple cars belonging to Eisenhower, Roosevelt, and Kennedy. After that we drove around the city of Detroit to look at its current situation. The city itself is a massive sprawl of single housing homes on the edges which were hit hard during the Great Recession and has become spotted with abandoned homes. Going from a population of two million to seven hundred thousand in the span of about ten years left an extremely depressing impression on the area surrounding the city. We also went and saw the Heidelberg project which is an art exhibit in the childhood street of the artist who gathered scrap and rubbish from around the abandoned homes of his childhood street and the surrounding neighborhoods to make the most out of a poor situation. 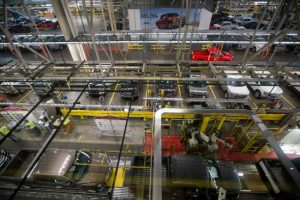 After sleeping through breakfast and scarfing down a protein bar in the minivan we drove out to Ann Arbor to see the Federal Mogul office. After a quick information session and discussion of Federal Moguls two departments (one focused on Powertrain and one focused on motor parts) we learned the site focused mainly on the powertrain side with special focus on pistons and spark plugs. We then were given a tour of the facility and shown everything from engine tests to spark plug research and their new designs. It was a surprisingly interesting tour and allowed us to see everything in their day to day operations.

After MCity we went to UMTRI, which is the University of Michigan’s Transportation Research Institute. Once there we were given a briefing on the auto industry by one of their head researchers and then were given the opportunity to ride in a high-tech driving simulator that the institute was using to monitor drivers’ attention when behind the wheel and how long it would take a driver to pay attention to alerts by a self-driving car. After trying to flip the car in the simulation and doing some obligatory 70mph doughnuts we went back to finish our briefing on the auto industry. When finished we went into Ann Arbor to get some dinner and then went back to the pink palace and went to bed

Our first stop on Wednesday was to the Federal Reserve where we were given a thorough explanation of how Detroit reached its current economic situation. The presentation was centered around how the corruption of the city’s leaders, the lack of a long-term city plan, the focus on single family housing across Detroit, the heavy reliance on the auto industry, and the effects of the great recession all came together to put the city in a rather poor situation. As the presentation went on the list of causes of economic troubles got longer and longer and genuinely helped me understand how a once prosperous city like Detroit could reach the economic lows that it had around the great recession.

After our time at the FED we went to the Ford Piquette Museum. Despite me having to leave midway through the tour to take a phone interview I genuinely enjoyed the museum. The building was originally used by Henry Ford to assemble his vehicles before he had his famous assembly line. The factory was divided into little subsections where workers would work in small groups building one car at a time and they did this until Ford started to slowly implement features that would later become the assembly line that he became known for. The Museum had all sorts of early fords as well as modified versions that many early car owners created, like a Model T dump truck or rugged early version of a snowmobile made from a Model T. After the Piquette tour we went to a vegetarian restaurant where we had dinner with journalists from Automotive News and Wards. After hearing about how the journalists chose to focus on the auto industry they asked us about what we had seen this week and wanted to hear our insights into the industry based on our visits. This ultimately lead to a pretty lengthy debate on the future of Tesla and Autonomous vehicles. In general, the dinner was a lot better than I expected, in both food and company. The vegetarian dish I ate was fantastic and the insights of the journalists added a lot more character and a much more human side to the auto industry through their explanations of their own experiences and connections to it. After dinner we went back to the hotel. 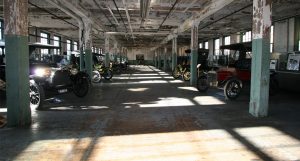 Thursday started with a trip to the Center for Automotive Research (CAR), which in my mind has arguably the best acronym of all the places we visited. Once there we listened to a representative talk about the state of the auto industry and their thoughts on self-driving cars and how distant their implementation would be. Their main reasons for a delay in achieving a commercial self-driving car seemed to focus on legislative barriers and or the burden of liability for incidents, mainly because if the self driving cars got into an accident then car company’s could be responsible for the accident and thus are hesitant to jump full force into self driving cars. The talk also emphasized goals for emissions and fuel efficiency. After our time at CAR we went to Continental Structural Plastics. The tour was probably the only time I’ve been genuinely excited to learn about the implementation of new types of plastics. We talked to the head of R&D and the head of strategy and they did a wonderful job of telling us how their new type of plastic will reduce the weight of certain things like Corvette car bodies, or the tops and doors of jeeps, or the engine covers of 18-wheelers. Their pitch was centered around the idea of fuel economy being improved by a reduction of weight by using the strong but light weight plastics they had developed instead of conventional metals. We then walked around the facility and got a feel for how their business was handled but the coolest thing was holding the different products to see the weight difference between metals and the plastic material and how strong the plastic was. After our time at CSP we went to Giffin. Giffin is a company that prides itself on being a full-service system supplier to a couple industries but in relation to the auto industry they focused on making the extremely complex paint shops for car factories. These shops are usually the most expensive parts of factories and require an extreme level of engineering to ensure that the process is done perfectly and in a manne, that is efficient and in line with regulations for pollution. They walked us through their most recent design for a paint shop and then showed us a live standing model they had for displays in their shop. After our time at Giffin we went to an alumni reception at a restaurant called Triple Nickle and then proceeded to hang out with some W&L alumni. It was nice to talk to them about W&L and how the school has changed and stayed the same since they were there. After the dinner, we went back to the Pink Palace, packed our bags, and went to bed.

We sadly had to leave Detroit this morning and start our journey home, but not without one final auto industry visit. On our way, back we headed through Carey, Ohio to visit the CSP factory there to better understand their manufacturing process and to see a Giffin paint shop in action. Once we got there we had a similar presentation to the one we received at the other CSP site about the perks of their new plastic materials while also giving us the details of how large their factory was. Once we had a proper safety briefing, grabbed a pair of glasses, and put in some earplugs we were off and ready to see the inside of the factory. Inside the factory was a labyrinth of workshops doing most any process under the sun to prepare the parts with both human workers and high-tech robots.  Like the Ford F-150 plant, the level of organization and efficiency of the CSP plant was a little overwhelming at first with a whirlwind of actions happening around us as we walked across the vast factory floor. After what felt like a 5 mile hike, with a slightly unnatural amount of automated painting robots, we ultimately ended back where we started the tour. After saying our goodbyes and leaving our last box of Lebanese pastries we started our journey back to campus.