Today’s tour of Federal Mogul in Plymouth Michigan exposed us to the specifications of automotive powertrains and the innovations that are currently helping to improve engine efficiency and overall fuel economy. Recently, President Obama announced stringent new emissions standards that will require automakers’ fleets to average 54.5 mpg by 2025. In order to meet this ambitious goal, automakers are looking in large part to improvements in the engine’s powertrain that will help increase fuel economy. As was explained by engineers from Federal Mogul, this entails the adoption of technologies that help to improve fuel economy by as little as one percent. While this small improvement may seem trivial, given t
e volume of cars produced each year it is quite significant.

Yesterday we began our day with a visit to the Ford Rouge River Plant in Dearborn. The impressive complex measures 1 mile long by 1.5 miles wide and includes over 16 million square feet of factory. Henry Ford conceived of the Rouge River Plant as an innovative and thoroughly modern factory that would showcase his vision for mass production.  The plant, first built in 1917, became a 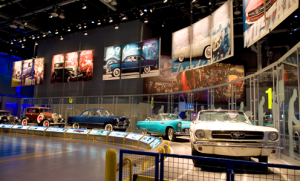 model for vertical integration techniques in the 1920s as nearly every part that went into a Model T was produced on site by Ford. At its peak in the 1930s the Rouge employed 100,000 men and was the largest factory in the world In the last 30 years, however, Ford and other auto manufacturers have begun to outsource many parts in order to save money. Seats, windshields, bumpers and raw materials that go into automobiles are now produced by suppliers and purchased by Ford. As such, Ford has sold certain buildings on the original property, including those once used for
steel production, to other firms.  Under the direction of then CEO William Ford, the entire Rouge complex was completely renovated in 1999 and now includes and museum as well as a rooftop garden and rainwater treatment facility. Today the Rouge produces Ford F-150 trucks and is very much a modern factory, despite being nearly 100 years old. While on a tour of the factory we had the opportunity to watch the assembly line in production and see brand new F-150s rolling off the line.  At the Rouge it takes 7 hours to assemble each truck as a brand new F-150 rolls off the line every 70 minutes. Beginning this year Ford has incorporated an all aluminum body into the design of the F-150. This lightweight body has helped improve fuel economy and allows Ford to meet fleet wide emissions standards.

Today we visited the Federal Reserve Bank of Chicago’s Detroit branch and learned about monetary policy and how it pertains to Detroit. As our hosts explained, there is little that the Fed can do unilaterally to help alleviate Detroit’s financial woes and as such it must rely on cooperative municipal officials who are willing to seek out the Federal Reserve’s guidance. Our hosts explained that Detroit’s financial crisis and ultimate bankruptcy can be explained in part by a series of negative con

ditions that define the city. These conditions include reliance on a single industry, housing segregation, lack of a public transportation system, declining population, poor education system, high municipal taxes, and political corruption. While some observers point to other struggling American cities and claim that they are the “next Detroit,” very few localities in the United States can claim all of these attributes like Detroit can. Even so, Detroit remained in bankruptcy for less than one year and has emerged from the process stronger due to increased investment from the state and private sector as well as a long term strategic plan that will be implemented in coming years.  However, significant challenges remain as crime remains stubbornly high and the Detroit Public School (DPS) deals with its own financial crisis. Unable to pay teacher salaries let alone engage in much needed capital spending, the DPS faces the threat of insolvency by June if the State of Michigan does not step in to provide aid. Ultimately the only path forward for the DPS may be a bailout similar to that provided to General Motors by which the DPS is reorganized as an entirely new entity free of debt while the old DPS holds onto the existing debt.

Despite incredible progress since Detroit filed for bankruptcy three years ago, the composition of the city will prove to be a major obstacle to the city’s revival. Detroit, unlike many other large American cities, contains mostly single family dwellings as opposed to apartment buildings. As such the city is quite expansive. In fact, Detroit is so large that Boston, Manhattan, and San Francisco could all fit within the city. Because Detroit is so large and spread out it is incredibly difficult and expensive to provide city services. In 2013, at a time when crime was on the rise and building across the city were literally falling down under their own weight, the average response time for 911 calls was over an hour. Even today 911 response times are on average 15 minutes. As Detroit has lost 2/3 of its population over the past half century, the city’s tax base is quite small and it remains to be seen how Detroit will raise the necessary revenue to improve city services and attract residents. Thus, the city is caught in a Catch 22 as it is unable to spend money to attract people because there aren’t enough people here already to pay taxes. Despite all of these obstacles, Detroit has seen a rebirth is some neighborhoods as more people are attracted to the city by the low cost of living and incentives for homeowners. As such there is reason to be cautiously optimistic for Detroit’s future.

Today we visited Fox Auto Recycling in Belleville Michigan. Fox purchases, for between $1,000 and $10,000 depending on the condition, wrecked cars from insurance auctions and salvages what parts they can before recycling the car. Each day the owner of the company checks out insurance auctions online and bids on several different cars electronically. An innovative c 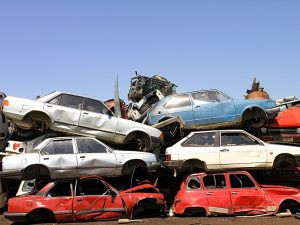 omputer program developed by Fox allows bidders to know the maximum price that they can pay for an individual car based on the value of its major components as well as how in demand the car is. When a car is purchased by Fox either the engine or the transmission is immediately removed and sold to a customer. Fox does
not purchase cars without already having a buyer lined up for either the engine or transmission. After this the extent of the damage to the car is assessed and Fox categorizes all the parts from the car which they can sell. The cars are placed outside for a period of six months during which time Fox sells every part off the car which they possibly can. After six months the car will be crushed and sold for scrap steel. Fox will only scrap a car after they have broken even on it by selling parts to customers.

During our visit to Fox Auto Recycling I was amazed at how much technology is employed by the company to manage the recycling business. In addition to using a computer program to quickly assess the value of a car before bidding, Fox uses algorithms to track how often customers request certain parts. This information allows Fox to be sure to have high demand parts in stock at all times. The owner stressed to us during our visit

that Fox is not competing directly with other salvage yards but is instead competing against auto parts stores and even the OEMs. As such, Fox works closely with other auto salvage firms around the country to buy and trade parts. For instance, Fox purchases doors and bumpers from salvage yards in Texas because they do not have the rust that is common on similar parts found in Michigan. This close working relationship with other salvage yards is a win-win because everyone in this industry can expand their business by working together.