After breakfast at Best Western, we drove to Ford Motor Co. headquarters.  After being readily reprimanded for attempting to take a picture in the lobby, we were escorted up the escalator to a conference room.  Chief economist Ellen Hughes-Cromwick and director of global trading and risk management Dennis Tosh met with us to discuss details of their respective occupations and field a number of our questions.  Dr. Hughes-Cromwick, who manages a team of economists that oversee operations in four different global regions, directed most of the discussion.  Hughes-Cromwick discussed, among other things, how she and her team analyze a variety of data to help Ford executives make decisions on a global scale. 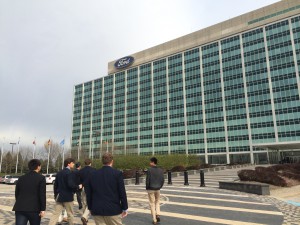 We then went to Federal-Mogul, an international automotive supplier that supplies to a number of OEM’s.  Director of engineering and technology Keri Westbrook greeted us upon arrival and gave us a detailed powerpoint presentation, outlining both Federal-Mogul’s global operations and overarching factoids, as well as specific information about the location in Ann Arbor.  On our tour, we saw the number of dynamic engine components produced by Federal-Mogul, the research and development of which took place in the location at Ann Arbor.  Among the products we saw being developed were engine pistons, rings, and spark plugs.  It was interesting to me to see the research and development stage that goes into creating a product.  This experience complemented our visit to Metalsa in Roanoke, where we got to witness the manufacturing process which follows the research and development stage.

Today was a great welcome to the city and surrounding area of Detroit.  Other experiences today included becoming acquainted with local expressways, visiting the University of Michigan’s campus, and touring the Ann Arbor downtown area with classmates.

On day 2, we went to the Detroit branch of the Federal Reserve Bank of Chicago.  We met with business economist Paul Traub.  Mr. Traub went over a number of data sets with us, including figures on GDP, inflation, labor markets, and other relevant aspects of US economy.  Concerning the failure of Detroit’s economy, Mr. Traub noted that the government spending and investment component of GDP were very low at a time when they could have been higher and helped Detroit’s economy.  After Mr. Traub, Martin Lavelle gave a presentation on his understanding of the Detroit Bankruptcy.  Lavelle cited a number of reasons for Detroit’s bankruptcy, such a population loss, legacy costs, lack of long-term vision, less skilled labor force, rivalries within Detroit and between Detroit and other cities, and poor leadership.  This turned out to be in my opinion the most informative and most interesting of our experiences. 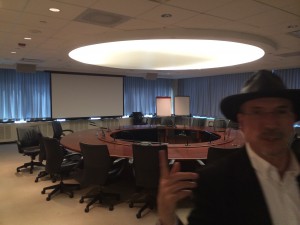 Later that day, we went back to Ford World Headquarters, this time meeting in the well known Thunderbird room on the 11th floor.  Here, we met with members from Ford’s HR department and Strategic Planning department.  The HR representative Felicia Fields discussed Ford’s vision and mission statement, Ford’s eras by CEO, and went into depth on the ONE Ford motto.  Mary Anderson from Ford Strategic Planning discussed the need for STEM education and employment value proposition (EVP), among other things.  The meeting then concluded with a Q&A session. 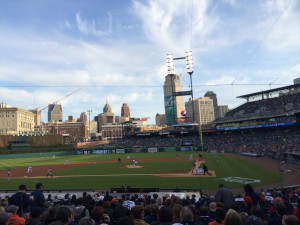 That night we went to watch the Detroit Tigers play my hometown team the Houston Astros.  The game was really fun but got a little cold and my team was getting so badly that I got sick of watching.

Day 3 began with a trip to the Heidelberg Project.  This was by far my least favorite part of the trip.  Aside from the fact that it was cold and rainy, I was completely underwhelmed by the smiley faces, polkadots and stuffed animals nailed to crucifixes among piles of rubble and ash.  After an exhausting stroll around the city blocks trying to attach meaning to shoddily constructed formations and paintings with no discernible significance, we were greeted by the artist himself.  Dr. Tyree Guyton asked us a series of vague philosophical questions.  I found little redeeming value in the Heidelberg Project, neither as a artistic institution nor as any sort of blessing in the Detroit community.  It seems Dr. Guyton  has good intentions and holds the interest of his neighborhood at heart, but setting up an institution that has baby dolls on crucifixes in a small neighborhood with four churches within a short radius seems slightly foolish. 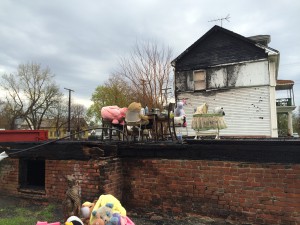 After a quick trip to Detroit Institute of Art (the assets of which may be liquidated to help Detroit get out of bankruptcy), we went back to Ann Arbor to visit UMTRI.  UMTRI turned out to be a very interesting visit.  The UMTRI researchers showed us the V2V innovations, which use short length radio waves to communicate to other vehicles.  UMTRI is working to make driving a safer experience, and from what I can tell they are leaders in such innovation. 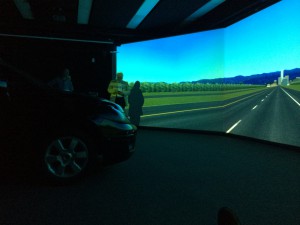 That evening, we went to dinner at Vinsetta Garage with three journalists from Automotive News:  Dave Versical, Jim Treece, and J Ferron.  This was another of my favorite experiences from the trip.  I gained a much better understanding of the real world implications of what we had been studying during our encounter with these gentlemen.  With one journalist, we had a very long discussion about Tesla, and with another we talked at length about Ford Motor Co. moving forward with Mark Fields soon becoming CEO.

Later that night, Peter, Hampton, Durkin, Anton, Kuangdi and myself went to White Castle to get some little slider burgers. 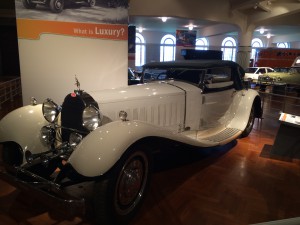 On our last full day before returning, we went to the Ford’s Rouge plant, where Ford assembles the majority of the world’s F 150 pickup trucks.  The tour of the Rouge was quite educational.  We saw all sorts of different types of F 150 assembled, including the Raptor, Platinum, and standard F 150.  We also saw the trucks being tested after assembly in the back of the plant.  Then we went to The Henry Ford Museum.  There were so many cool cars from different companies in this museum that I feel I could have spent a full day there and still not have seen everything.  I very much enjoyed this part of the trip.

We next drove out to BorgWarner, a supplier of powertrain products to many OEM’s.  In terms of overall experience at a supplier, I enjoyed BorgWarner slightly more than Federal Mogul.  I enjoyed getting to hear about the marketing and finance aspect of the supplier.  Federal Mogul seemed to focus a bit more on engineering.  Also, I liked the work place environment at BorgWarner.  After BorgWarner, we made a quick visit to Brose, a supplier of electrical systems for many OEM’s.  We received a rundown on pretty much every part of a car for which Brose makes electrical equipment.