Prior to our meeting with Federal Mogul, Professor Smitka led us on a tour via car through the surrounding suburban areas of Detroit. Excluding the waterfront neighborhood of Grosse Point (clearly the homes of mid to high level executives), we were taken dow 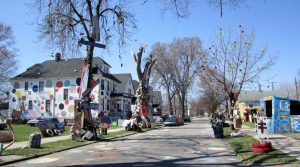 n streets varying in levels of disrepair. These ranged from peeling roofs to houses with excessive burn damage, and an outlier or two only had foundation left. Yet within the damaged Detroit suburb was a fascinating work of art, the Heidelberg Project. The founder, Tyree Guyton, uses discarded everyday objects to create symbolic works that incorporate a vast aray of colors and force the viewer to think critically about the art. Our visit was limited with our appointment with Federal Mogul approaching, and soon it was time to depart.

My fascination with Federal Mogul began as soon as we entered the lot, where I witnessed quite the construction effort taking place beside the building. I had figured the construction might simply be a new parking lot, or maybe a test track. However, I was mistaken. Upon meeting with Kerri Westbrooke, Director of Engineering and Technology at the facility, I was informed of their plans to nearly double the size and workforce of the building. This was in part due to the resounding success of the steel pistons developed there, and to a relocation of the marketing team and other departments so that every division would be under one roof. Westbrooke described the move as realization of “synergy” within the corporation.

Along the tour we were given, we were able to visit each department of the facility, including application engineering and technology specialists. The former would work directly with customers to apply the technologies developed by the latter. Some of these advancing technologies include 3D product inspection, new forms of welding (a PACE award winner), and a brand new type of spark plug – the Corona Ignition System. The new system, pictured right, uses less current and is able to more completely burn the fuel in the engine, resulting in better fuel economy of five percent when retrofitted, with the possibility of ten percent or more when utilized to its potential in new designs. It was truly an exciting visit, and only further sparked my interest in the industry.

Day two in Detroit began with a tour of one of the largest and most impressive car production facilities in America, the Rouge. From 1964-2004 the factory produced the iconic Mustang, and due to recent shifts in demands exceedingly favoring trucks, the F-150 has been the only product coming off its lines since 2004. The initial presentation was breathtaking; it included a multisensory show including lasers and a full size model of the new F-150. I would never say that the production process is boring by any means, but this show was awe inspiring. Once we had been sufficiently introduced to the production process, we were given access to the assembly line in the plant, where we could watch the F-150 be assembled in real time. 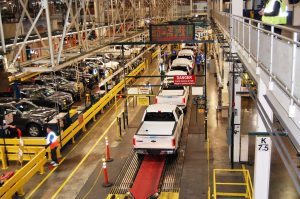 Next we headed to the Henry Ford museum, which showcased massive locomotives, important car models of all brands, planes, tractors, and much more. I was most shocked by the sheer size of the locomotives, these are truly large and impressive works of engineering. Additionally, it was fascinating to see some of Ford’s crown jewels such as their GT40 and early Mustang, and some of the cars they made for the president. The museum itself was sprawled out over a huge distance, so viewing every piece took a considerable amount of time.

The peak of the day came at Ford Headquarters where we met with  Hau Thai-Tang, vice president of global purchasing. His presentation discussed the importance of the humanities in Ford’s business strategy, clearly geared toward his audience of liberal arts students. Afterwards he answered some of the questions we had that ranged from the impacts of VW and Takata, to the implications of fully automated cars, to the different types of car buyers. Mr. Thai-Tang even said he was impressed by our knowledge on the industry and our questioning; it’s not everyday that you can impress a senior Ford executive. 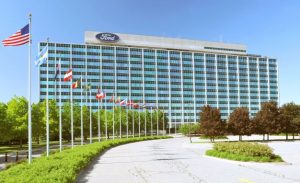 Our third day in the Motor City began with a trip to the Federal Reserve. Professor Smitka described the entrance to be tank-proof, but upon further inspection I came to the conclusion that an actual tank could in fact penetrate the security measures, but anything less would have significant problems. Considering that our guide estimated that the vaults contained several billion dollars, the security is justified.  Additionally, we were told about procedures for identified counterfeits, monitoring the inflow of cash, and other daily operations. Our first real economic presentation can afterwards, and we were first given the current economic state of Detroit followed by the reasons for the city’s declaration of bankruptcy and the future outlook. I agree with the outlook the economist provided, which is a cautious optimism. Detroit is currently positioned to make a comeback, yet the city needs to stay on track and overcome several obstacles, such as the debts of the school system. But like I mentioned before, I am optimistic for the future based on the strong leadership present in the city now.

Later that afternoon, we had the privilege to meet with both Mr. Bruce Belzowski and Mr. Brandon Schoettle to discuss their work and MCity, a testing grounds for autonomous vehicles. Much of the meeting focused around safety and the on going research in said area. It was fascinating to see how much analysis goes into developing and testing safety technologies, and Mr. Schoettle went into great detail in this with headlights. The conversation eventually shifted to autonomous vehicles, where we learned about the different stages or levels of autonomy, five being the highest level. With this ongoing dialogue we headed out to MCity where we were given a glimpse of the future of automotive testing. The area was able to encompass many real life traffic scenarios, and included a small town to model city driving. Although I am unsure of the future of autonomous vehicles, the University of Michigan will play a significant role in its progress.

Thursday morning began with a visit to Fox Auto Parts, a parts recycler in Belleville. Their business model stems from purchasing wrecks from auto insurers, such as Insurance Auto Actions next door, which they either organize into rows in their self-service lot, or disassemble and catalog parts to be sold in the full-service section. Engines and transmissions are the largest sellers and are therefore pulled first, whereas the rest of the vehicle is stored and can have additional parts pulled from it as they are purchased by customers. Once a car has had all of it parts pulled or has been on the lot for around 6 months, it is crushed and sold for scrap. What I found most interesting was the cooperation between parts recyclers across the country. They don’t seem to see each other as competition and will share advice on how to run certain aspects of the business. Instead, the recyclers see the OEM’s as their main competition, and Fox Auto Parts mentioned how the OEM’s constantly try to reduce prices to drive out recyclers. 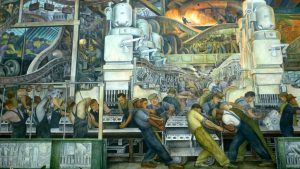 During lunch, we stopped at the Detroit Institute of the Arts. Upon entering the museum, we were greeted with a massive mural by Diego M. Rivera depicting his view of the auto industry in Detroit, shown above. An employee of the museum talked about the Rivera’s communist views and how they appeared in the work, such as a red star on the glove of one of the workers. The rest of the museum contained works by famous artists like Andy Warhol, Picasso, and van Gogh. Interestingly enough, Tyree Guyton was also featured, and we were able to meet with him later that day at the Heidelberg Project. Through a series of questions, he questioned our perception of reality and what it means to truly be happy. It was a eye opening conversation that not only made me think about my answers to his questions, but to consider his message as a whole.

Thursday wrapped up with dinner at Vinsetta Garage with Jim Treece and J Ferron of Automotive News and Steve Finlay of Wards Automotive. They shared their experiences in the industry over a great meal, and it was quite the opportunity to speak with such highly regarded journalists.

Our trip in Detroit ended early Friday morning as we headed towards the Transportation Research Center (TRC) in East Liberty, Ohio. TRC administers tests for safety, energy, fuel economy, emissions, durability, noise, crash, crash simulation and performance. The independent proving ground tests trucks, buses, recreational vehicles, motorcycles, electric vehicles, passenger cars and components. Honda owns the actual track and leases it to TRC, and while we were there we saw several camouflaged Honda’s undergoing testing, as well as performance driving by the engineers at Honda. Jeff Sprague and Amanda Rockhold drove our group around their campus and through many of the tests. Going through the frame rigidity test in a huge Suburban was interesting to say the least. The tour of the test track may be my favorite moment of the trip as I had a blast seeing all the testing and catching a glimpse of the brand new Acura NSX.