Right off the bat we had a meeting at Ford Motor Company WORLD HEADQUARTERS. While I was still in shock about being in the home base of this industrial juggernaut Dennis Tosh introduced himself to our class. This Ford employee oversees the cash flow for the whole company. He oversees billions of dollars moving in and out of the company every year. I greatly value having the opportunity to learn about the tasks of people like Mr. Tosh and Ford’s head Economist Ms. Ellen Hughes-Cromwick. Overall a solid start to the trip.

After leaving the headquarters in Dearborn we headed to a Federal Mogul facility in Plymouth, MI. Federal Mogul is a tier one auto industry supplier. They create parts for a car’s powertrain (pistons, sparkplugs, etc.). We were greated with a nice lunch and then swiftly split into groups for a tour of their labs. From that point on I didn’t understand anything that the engineers were explaining. The science behind their product development is baffling to a non science oriented mind. Regardless, the tour was enjoyable and seeing people that care about making the best, not to make money but because they are actually passionate, is refreshing.

When we were done at Federal Mogul we went to Ann Arbor to the University of Michigan. We briefly toured the campus with the Professor Smitka’s brother who is a program/budget administrator there. Other than the obvious contrast of population between our school and theirs. I noticed a significant difference between the technology of W&L and the state school. The first room we walked into in the Umich student center was a high tech computer lab with all Apple computers. I was slightly jealous. 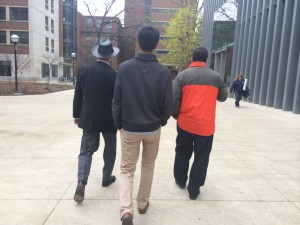 After eating and leaving Ann Arbor we came back to the “Pink Palace”. I immediately went to work on writing a couple of blogs and then fell asleep, exhausted from the long but exciting first day.

For me, day two was by far the best. We started the day at the Detroit branch of the Chicago Fed. The first thing they showed us was the warehouse where they stash their 8 billion dollars in cash, something I consider hard to think about because this warehouse is in a neighborhood that is obviously filled with struggling people. I almost got a Feudal vibe from the scene. A castle with gates and walls holding in vast riches while the surrounding village starves. Anyway, we were greeted by Dr. Paul Traub (senior economist at the branch) who gave us a run through of the auto industry. He knew his stuff, having experience in the industry himself. Then Martin LaVelle, one of their economists, explained every part of the D-Town bankruptcy. This meeting, I thought, was the most relevant to the class that we had. My knowledge of economics from 101 and 102 helped me greatly in understanding their presentations.

After we left the Fed. we headed back to Dearborn to the Ford Motor Company World Headquarters. Driving in I was wondering what the room at the top was. Who worked there? What secret things happened in the Ford penthouse? Little did I know that ten minutes later I would be up there, in the “Thunderbird Room”, the historic room in Once Upon a Car. The Ford Group HR VP, Felicia Fields, gave us a presentation on Ford’s strategy and the future of Ford. I wish I had gotten more out of the meeting but I was still in shock even when we were leaving. This meeting made me realize just how blessed we are to go to a school that gives us opportunities like going to a $60 billion company’s main meeting room and talk to executives.

We finished the day with a Tigers game. It was my first game at Comerica Park; it was very similar to Citizens Bank Park in Philly. As soon as we sat down I told Kade that if Cabrera hit a HR this next swing I would go buy an authentic jersey of his… of course the next swing went way out of the park. $150 later I had a nice jersey and everyone was laughing at me. I wanted to thank you again, Professor smitka, for allowing us to go to this event. It was a blast and a once in a lifetime experience since I will probably never take the trip back to Detroit. A good end to the second day. 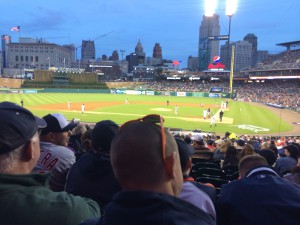 I was extremely skeptical about our plan for Thursday morning. Waking up early to be at something called “The Heidelberg Project”, didn’t sound like something I wanted to do. Especially when I woke up and saw that it was pouring down rain. When I saw the first house covered in polka dots… you can guess I was a little baffled. But everything changed when we started the tour. The ideas and concepts of Tyree Guyton and Lisa Rodriguez were so striking that it brought the neighborhood to life. I felt what they were saying. It’s a shame that someone is burning down their artwork, their project is probably the best thing to happen in that neighborhood for a century.

After we were thoroughly soaked and cold we hopped back in the cars, everyone a little bit more introspective than they had been before seeing their art, we went to the Detroit Institute of Art or DIA. The day before Dr. Traub explained that the worth of everything in the institute totaled a billion dollars and that the city was contemplating selling everything. Quickly walking through the exhibits (we were late), I didn’t get everything from the museum. That being said, the Diego Rivera murals were absolutely stunning. The images depicted Detroit’s auto industry in the 1930’s. Those murals are a masterpiece. 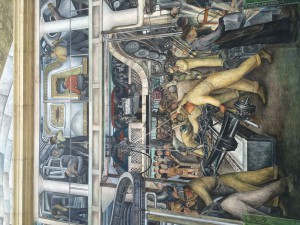 We then headed over to UMTRI (University of Michigan Transportation Research Institute). Dr. Belzowski gave us a tour of his peoples’ work. At UMTRI they are doing research around autonomous vehicles… yes, automobiles that drive themselves with little or no effort on the part of the “driver”. The people there seem very passionate and interested in finding out if this technology is actually usable. If the kinks were worked out, this technology could prevent the 32k deaths every year from cars. We will see in the future if these people are successful.

Day four, the last full day, started out with a tour of the Rouge. Possibly the most famous industrial facility ever constructed. Henry Ford’s vision of the factory was a completely self sustainable unit of production. At its height the Rouge had over a hundred thousand employees. From 1917-1940 the Rouge dominated the game. To this day it still pumps out vehicles. We were able to watch the final stages of production for the F-150 and the Ford Raptor. A very cool experience.

We then left and headed to the Henry Ford Museum. I have never seen so many beautiful cars. I was even able to see historic cars like the 1931 Bugatti Royale and the Ford GT. This trip to the museum only lasted ten minutes but in those ten minutes I saw some of the coolest things I have ever seen.

Borg Warner was our next visit. Borg Warner is another Tier 1 supplier like Fed Mogul. I was much more impressed by BW. Their facility was new, well designed, and filled with a certain aura of innovation. They seemed to have a solid business model and niche that they filled in the auto industry. Their specialty seemed to be their superchargers; they were happy to tell us all about how they were used in the Indy 500. I also felt much more appreciated at BW than Fed Mogul. The people at BW seemed to be pitching us job opportunities, which is promising to our generation since we always hear about the national unemployment problem.

So we left BW very worn down from a long week of learning and fun. It was a good thing that our last visit, Brose, was so short. We were given a quick overview of their product catalogue and then ushered out of the door. Their products seem to be very technologically advanced, probably why they have won some PACE awards.

We went back to the Pink Palace, exhausted by this point. I almost immediately went to sleep. This quick nap helped me get myself ready to meet with the alumni downtown. We met them at a law firm on the 35th floor of a Detroit skyscraper. They greeted us warmly with dinner and conversation. We were given a lecture on the bankruptcy of the Detroit 3, and by this time I could tell that my peers and I knew almost as much as the lecturer. We had learned so much in the past week. Also the view from the offices was spectacular. Luckily I was able to get a couple pictures.

After waking up late Juan and I quickly packed up and ran down to the cars where I fell asleep until we got to Columbus, Ohio. We had lunch at a nice inn with retired Honda executives. It was light conversation since everyone was so exhausted but a good capstone to the whole trip.

When I got back to Lexington, I wearily trooped up to my room with my bags and fell on my bed. Then there were fireworks outside of my window! What a great week. A special thanks to Professor Smitka for putting the huge puzzle together to figure out our schedule the whole week. It couldn’t have gone better. Also thanks to all of the people and companies that gave us their time to educate us on the auto industry. 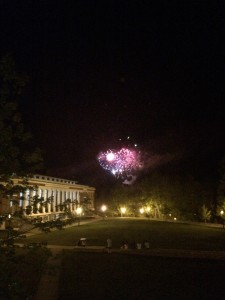 I apologize that some of the pictures are sideways I couldn’t figure out how to fix them. – the prof: looks like you have to use an outside photo editor and then reload…

Thanks for your thoughtful journal; note I corrected several wrong titles / names / dates, without flagging them.

Federal-Mogul is indeed intimidating but conveys the high-tech nature of today’s industry. Hopefully it will stimulate you to take a couple real science courses so that you are better positioned to learn about the various technologies that you may have to help manage during the course of your careers. Now, imagine being in a job where you’ve days like we had, 5-6 days a week. Someone like J Ferron of NADA / JD Power / Automotive News does that a lot, as do sales engineers and others who are responsible for the customer interface. But not everyone’s cut out for it!

The US will see local decline here and there, but unfortunately fiscal choices at the local and perhaps the state level will make bankruptcy all too common. Legacy costs are central, as in Detroit. One is that some places (especially in but not limited to California) needed to (or at least did) provide pay increases to employees, but had no short-term revenue sources. The solution was to sweeten benefits with early retirement and better pensions. (That employers would provide healthcare was taken for granted by the 1950s, not much discretion there.) Perhaps you can follow up in that area!