On Sunday, we spent the day driving from Lexington to Detroit. We left Lexington at about 8am and arrived at our hotel, the Best Western Pink Palace in Allen Park, a little before 7pm. We drove from Lexington, through West Virginia, through Ohio, and eventually into Michigan. We had dinner at a Lebanese restaurant named Al Ameer in Dearborn, visited a pastry shop, and then went back to our rooms to sleep and prepare for the week ahead. 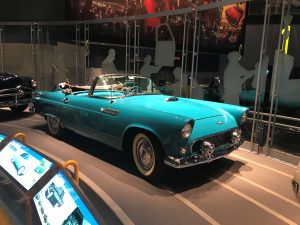 On Monday, our first stop was to tour Ford’s Rouge Factory. It started off with a 10 minute video about the history of Henry Ford and the Ford Motor Company. We then went to another small theater across the hall to watch a video about the F-150 truck and how it is put together in factory. Next came the part of the tour that we were most interested in, walking along the catwalk of the actual factory floor, getting to witness trucks going down the assembly line. We were able to see most of the steps of the process, except for the pressing of the steel. After this portion of the tour, we went back to the lobby of the Rouge Factory and looked at some of the cars they had on display, including this 1958 Ford Thunderbird that can be seen to the right.

Our next stop after the Rouge Factory tour was to spend some time in the Henry Ford Museum, where we were able to get lunch at a small diner in the middle of the museum, and were able to take a look at some historic automobiles as well as trains. Some of the exhibits that I found most interesting were the presidential cars, including the one that President Kennedy was shot in while in Dallas. I also liked the NASCAR number 9 car that Bill Elliott drove for the fastest lap time in NASCAR history before they put restrictor plates in the engines. There was also an old luxury car from the early 20th century that had a windshield no bigger than a foot tall. I suppose visibility was something they could sacrifice in order to make the car more luxurious.

Our final activity on Monday was a drive through Detroit to get a sense of the city as a whole. The city is very sprawling, and there is a lot of juxtaposition of lower and upper class neighborhoods. We stopped at one neighborhood that was home to an art project known as the Heidelberg Project, and got the opportunity to speak to the artist. It was a very interesting block of buildings, standing or not, that were converted into a giant piece of art using old vinyl records, dolls, TVs, shoes, and many paintings of clocks to show the importance of time to the artist. an example can be seen on the right. 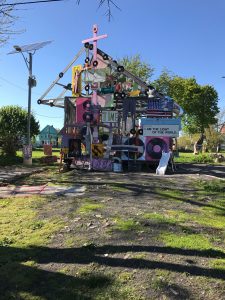 Federal Mogul was our first stop on Tuesday, which started off with a quick overview of the company followed by a tour of the facility led by the engineers that researched there. Their primary focus is on pistons and spark plugs, the most interesting thing being the new spark plugs they were working on. They used radio waves to produce a more powerful and efficient spark than traditional spark plugs. They have been in production for a couple years, and are hopefully going to be seen in cars in the coming years.

Our next stop on Tuesday was University of Michigan in Ann Arbor, where we were able to visit M-City, an autonomous car testing track, and UMTRI, which is the University of Michigan Transportation Research Institute. At M-City, we had the opportunity to test an autonomous vehicle made in France, although it did not go well. There had just been an update to the car’s software, and there was a new bug that hadn’t been patched, so the car immediately almost hit a parking lot sign. The rest of the drive was done with an xbox controller because the car lacked a steering wheel or pedals. At UMTRI, we had a conversation with a researcher about the current state of the automobile industry and predictions for the future regarding autonomous cars and fuel efficiency goals.

We started off on Wednesday with a visit to the Federal Reserve to talk to Drs. Paul Traub & Martin Lavelle. We spoke with both of them about the current state of Detroit and its economy, and how it has been slowly improving. The city is still working through the aftermath of their bankruptcy and is trying to encourage people and businesses to return to the city. We also talked about the role of the auto industry for Detroit’s booming years in the 20th century and its eventual downturn during the beginning of the 21st century.

After this, we went through a tour of the Piquette Museum, which is on the site where the Model T was first made. We learned about the progression of Ford cars, as well as some if its competitors, all the way to the Model T and beyond. We also had the chance to sit inside a real Model T, and feel how it may have been to drive it. Following this tour, we had dinner with Jim Treece from Automotive News, Dave Versical from Automotive News, and Steve Finlay from Wards at a vegetarian restaurant in Detroit. We discussed with them the things we had seen so far on the trip, as well as other topics pertaining to the auto industry.

On Thursday we began our day at the Center for Automotive Research (CAR). Here, we had a conversation with a market analyst about the automotive industry and how they research and gather data about it at CAR. The main talking points were about the goals that have been set for emissions as well as fuel efficiency. We also talked about the current laws pertaining to autonomous vehicles, and how currently the liability for the failure of an autonomous car lies directly with the manufacturer. This is incentivizing car manufacturers to not pursue the idea of autonomous vehicles because they cannot afford to take on that liability, and until the laws are reformed there will be car manufacturers refusing to put these vehicles on the road.

We then went to visit Continental Structural Plastics, which is a company that produces a kind of plastic that can be used to replace steel in making cars. The advantages to this material is that it is lighter than steel and it performs similarly in crash tests. The lighter weight will likely help with reaching the goals of fuel efficiency and emissions that car manufacturers have been tasked with achieving. The big problem that they had with this material is that it could not go through traditional car painting ovens, but with the help of the next company we visited (Giffen), they were able to come up with a way to paint this material in a similar manner. Giffen is a company that produces the complex painting ovens for vehicles, and they have achieved the most efficient and least polluting system, which we were able to see examples of both in Giffen and in the Continental Structural Plastics factory that we visited Friday morning. 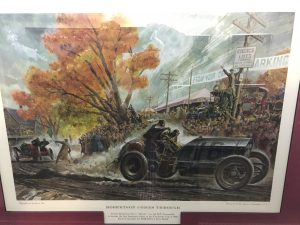 On Friday morning we woke up at 7am to make it to a factory tour of the Continental Structural Plastics factory in Carey Ohio. We walked through and watched as lumps of plastic were pressed into car parts. After they were pressed and their quality was assured, they were put through one of the Giffen painting booths that were installed into this factory. The main outputs of this factory were large truck hoods and hardtops for Jeep Wranglers and Rubicons. After this tour ended, we made the long trip back to Lexington, arriving home around 7pm.

On a side note, the Pink Palace had a lot of car pictures and paintings throughout the first and second floors, and my favorite was this one on the left of some very old racing cars. I liked this painting the most because I have always been a fan of racing, and this picture illustrated to me how far the sport has really come in terms of safety. The cars in this painting are open-topped, and the driver and his companion seem to be wearing no safety gear other than a leather helmet. There is also what appears to be a flag man standing in the middle of the track, and there is nothing separating the fans from the cars. Nowadays the sport is centered around safety with walls between fans and cars, top level safety gear including fire retardant suits, and the flag man has his own stand above the track and out of danger.