In today’s biggest automotive news, BMW announced a partnership with Detroit-based automotive supplier Delphi for their venture into automated vehicles. This BMW partnership has lofty aims of a level 4 an 5 autonomous vehicle. This news follows the March announcement of a BMW-Intel partnership for the same purposes. Intel also acquired autonomous technology leader Mobileye in recent months for $15B. All of these acquisitions and partnerships must leave consumers wondering, “What’s next for autonomy?” 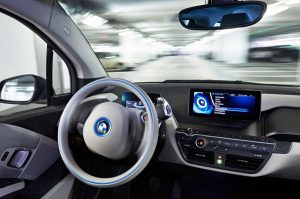 This BMW-Intel-Delphi partnership has expressed plans to produce this fully autonomous vehicle by the year 2021. There are currently only low level autonomous vehicles on the road featuring features such as lane departure warning and adaptive cruise control. The partnership plans to implement the potential fully autonomous technology into 40 vehicles for testing later this year. This big name coalition allows these companies to distribute costs among multiple large corporations. More importantly, however, is the ability for a technology company, an infotainment specialist, and a car manufacturer to work together utilizing individual strengths.

Delphi has also recently spun off its powertrain division in order to focus its efforts fully on electric and autonomous vehicles. This is a huge gamble for the company. There are no guarantees of success in this new market. However, partnering with the manufacturing and tech giants does provide a groundwork in which success would not be a surprise to many. 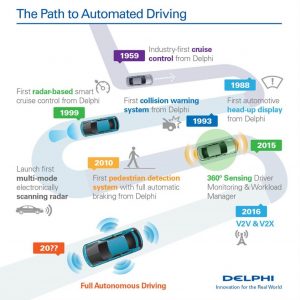 There are undoubtedly many obstacles facing the move toward autonomy. This group is not alone in their venture as many others are currently working toward the same goal. Daimler has partnered with Bosch, Toyota has paired with NVIDIA, and Left has partnered with Google’s former autonomous vehicle division. There is also the current lack of national legislation for autonomy. After my recent experience in an “autonomous” vehicle at the University of Michigan’s MCity, in which the vehicle failed in all kinds of ways, I have extremely low hopes for a successful venture from any companies involved.