Posted in auto industry, and autosandeconomics

The automotive industry has long been associated with “the big three” but over the past half century that term has taken on new meaning. The original big three referred to the American automakers GM, Ford, and Fiat-Chrysler. These Detroit based companies dominate the US and Canadian markets and command the American SUV market. The big three of today is much more fittingly described as the trio of American, German, and Japanese auto brand manufacturers. The German producers BMW, Daimler (Mercedes-Benz), Audi make up well over 80% of the luxury car market, while Volkswagen is Europes largest car manufacturer. The Japanese companies Toyota, Nissan, and Honda dominate the small car markets which have huge sales in Asia as well as South America. 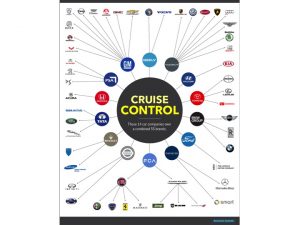 According to OICA, “if vehicle manufacturing was a country it would be the sixth largest economy in the world.” In 2005, over 66 million automobiles were produced and resulted in the direct employment of 8 million people, over 5 percent of the world’s manufacturing employment. This data is coupled with the sale of 94 million autos sold in 2016 alone. It is estimated that up to five times more individuals are employed as an indirect result of the industry bringing the industry total to around 50 million employees. China is currently the world’s leading producer at over 24 million cars per year followed by Japan, Germany, and the United States. The US is the global leader in commercial vehicle production with over 8.25 million per year. The more notable statistic, however, is that while China boasted a percent change of 14.5%, the big three countries were all under 1% growth.

The 2016 Davis Brand Capital rankings top-25 included Toyota (6), Daimler AG (7), BMW AG (12), and Ford Motor Company (15). These companies are ranked on a scale emphasizing performance in the categories of brand value, competitive performance, innovation strength, company culture and social impact. The auto industry itself ranks in the top five globally for market capitalization. Davis’ high rankings of the four automotive giants are credited to their specific advances in the areas of autonomous vehicle innovation and advances in craft such as Ford’s aluminum body trucks and BMW’s advances in green technology. A notable trendis the growth of Tesla as an American automaker. Though the company is not without its flaws, it currently boasts a valuation $25B higher than that of Fiat-Chrysler. This is just another sign of the bull market for green technology.

The ever evolving, global automotive industry centered in the US, Europe, and Asia is seemingly recovering from the recent recession and shifting gears to embrace technological advancements and excel in brand management.